What do you carry (11 cabbages & a grudge against your father for never coming back?) 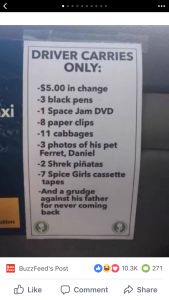 My attention is always caught by creativity; because it’s a great springboard to unusual ways of thinking & problem solving. This cab driver’s sign is a great example & got me thinking.

What do you carry?

The things we carry tell stories. They serve up memories from the past & memories yet to be made.

There’s the obvious ones – the things you carry in your pocket, purse or wallet.

If you were to peek into my purse you’d find a 5 Ringgit bill leftover from a trip to Malaysia (about $1.25 USD) & both a Canadian & a Kenyan driver’s license (where my age is listed as ‘over 18’).

What about you? Is there anything in your purse, pocket or wallet that would surprise people? Delight? Mystify?

What about the invisible things we carry.

Like, for some of us, who carry the invisible backpack (“White Privilege: Unpacking the Invisible Knapsack”) by Peggy Mcintosh, which seems even more timely now then when she originally wrote it in 1989.

And for all of us, we carry our culture – the many elements of culture such as our beliefs, values, faith, gender roles, role of leisure, work, the aged & the young.

Some of these elements are permanent, some of them flex. Some are critical to our sense of self & others not so much. And some may be the same as the dominant society & some not. 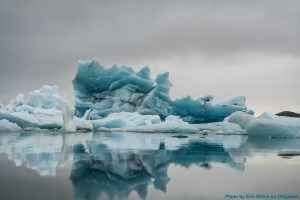 Some of these cultural elements are visible. Some are not. Like an iceberg, only about 10% of culture is immediately apparent. The rest is under the water line so to speak.

We tend to assume though that wayyyyy more is visible than it actually is.

Interestingly, if we push this metaphor further, like two icebergs that look miles apart, sometimes people that seem the most far apart, can actually be similar when you look under the water line. Their icebergs are touching under the water but they don’t know it.

Culture is shorthand for those that share the same one. For example if I showed you my cultural iceberg & under the water line you could see OCD, what would you think?

Wrong. I have osteochondritis dessican, a weird condition where the blood doesn’t always flow properly o the end of the bones.

So what else is on my cultural iceberg? What else do I carry? I’m a woman, a daughter, a wife, a mom, a grand daughter, a big sister who misses her addicted brother, a seeker, a friend, and an entrepreneur. I’m a self-employed, survisor of abuse, ACOA (I’ll leave that one for you to figure out), urban dweller, Canadian living in Kenya, 52 year old human with feet & hips that love to dance, & a lover of my hard won wrinkles. 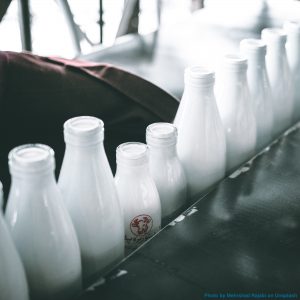 I’m the great grand daughter of my Granny – a tough prairie woman, who fell in love with the milkman who she exchanged love notes with via her purposely left behind mitten. They hatched top-secret plans to marry & during a community dance that took place during a wild snowstorm, she escaped the watchful eye of her brothers & fled to the train station to elope. Her father discovered she was missing & guessed what was happening. He called the stationmaster who not only ignored his request to not allow them to board but rather had mugs of steaming hot chocolate waiting for them as he whisked them off on the train to elope.

I carry these generational imprints.

What do you carry?

Check out this worksheet I developed that explains cultural elements & gives you your own cultural iceberg to fill in.

What you carry, & where you carry it (above or below the water line), may surprise you.