How do you say this word? → refuse 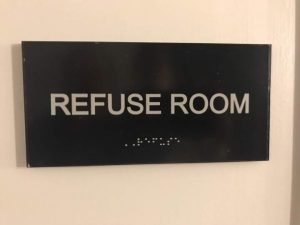 I was recently visiting dear friends in NYC. I’d originally met them in Nairobi but now they call New York home. We were having a wonderful evening on the rooftop patio of their new apartment in Brooklyn.

We’d taken the ferry over from Manhattan to discover their little oasis. The breeze off the East River whispered through the tall grasses planted on their rooftop garden. We were indulging our palates with salmon from home, beer & my partner’s beloved extra aged Gouda cheese.

As we left the patio to go back to their apartment, my friend, a non-native English speaker, commented on this sign we passed.

So how do you say that word again?

Does your pronunciation rhyme with shoes & the words means to deny or not accept.   Or does it rhyme with chartreuse & means waste or garbage?

My friend thought it meant the former & wondered what a room for denying or not accepting would be for.

Tangent: the mind boggles at the opportunities – a place to:

Your perspective depends on your culture including your language, where you are in the world, your literacy level, your context, your mood & even your last meal.

Yes when you last ate can completely affect your perspective.

In a study of roughly 5000 Israeli parole hearing cases, the ‘strongest predictor of a judge’s decision was how many hours it had been since the judge’s had eaten a meal,’ says Robert Sapolsky in a recent NPR TED radio hour called ‘How much agency do we have over our behavior?’

In other words how hungry or sated the judges were had a huge impact on whether they granted the prisoner parole or not. It was the biggest factor in their decision, yet they were completely unaware of it affecting their decisions.

Robert Sapolsky says ‘when we put people in positions of making moral judgments about behaviour, we see the more emotional parts of brain activate before the [logical, rational] cortical parts.’  He goes on to say that ‘free will is the biology that hasn’t been discovered yet.’

Putting it another way we have waaayyyy less agency than we think.

So are we victims of our biology? Should we throw our hands into the air in exasperation (or into a bag of cookies & indulge)? Do we despair our lack of control?

Nope – not at all. Rather it’s a time to enlarge your heart & your perspective.

Because we all want to belong, we all want to make a contribution here’s to holding people accountable AND recognizing the hidden currents that may be affecting others behaviour such as mental health, poverty, racism, sexism, & yes, hunger.

After all a hungry belly has no ears ~ Greek saying.

As a learning & development expert (aka training) I always make a point of asking clients if the participants I’ll be working with have any access or inclusion issues. I want to know if there anything that they know of that will affect the participants’ learning.

Here are some of the responses I’ve received over the years:

Of course not all groups I work with have such significant access & inclusion issues but I always take for granted that at least one person in the group has issues with trauma, mental health, poverty, racism, sexism etc.

I don’t need to know who’s gone through what.

I just know that people bring their whole, complicated, messy, beautiful selves to the training & it’s my job to make them as comfortable as possible so everyone can lean in to the learning.

So tomĀto or tomĂt0, refuse (rhymes with shoes & means to deny or not accept) or refuse (rhymes with chartreuse & means waste or garbage) our perspective is affected by more than we can know. This has a big affect on access & inclusion issues – how accessible learning is & how included people feel for example.

Go feed your belly so your ears are open & in turn, widen your perspective.