2 alternative conflict resolution techniques I picked up at the UN

√ Your blood pressure is boiling

√ You’re quietly simmering with your jaw aching from clenched teeth

√ Your heart is beating faster than a hummingbird’s wings

√ Your every muscle is screaming run, as you plan your escape

These are but a few of possible responses you might have when conflict rears its head. All of which take away from strategizing & moving towards conflict resolution.

Holly Weeks author of Failure to communicate; How conversations go wrong & what you can do to right them (I’ve written more about her work here & here) says we often view conflict resolution as a closed fan with only one or so go to technique. Our goal however should be to open the fan & discover a continuum of choices for resolution.

Recently I was in NYC at the UN’s General Assembly, a mecca of conflict & conflict resolution, where I picked up two surprising ways to move a conflict forward.

1. How to resolve a conflict when you can’t speak

When UN delegations are dealing with sticky situations & they’re not supposed to officially speak to each other (for political reasons) how can they possibly resolve their conflict?

In order to get on the General Assembly floor, high level delegations are exquisitely choreographed in their movements, to the tune of walk out of room, turn left, go 50 meters, turn right, take elevator on left to second floor, walk 105 meters etc. They make a Boy Scout orienteering hike look like kindergarten.

Back to delegations who aren’t supposed to officially speak to each other but have tricky conflicts to resolve. What’s a delegation to do?

They arrange an informal ‘brush by,’ which is where delegations will ‘accidentally’ run into each other while on the move. Quick snatches of time can be had for dialogue & dealing with conflict while passing in the hallway.

How you can use the concept of a brush by

When you have a conflict with someone & it’s ill advised to try to resolve the conflict in a formal setting, try an informal resolution.

As a mom to teen boys I know this all too well. Many a car ride, with both of us facing forward & not each other, have led to intriguing conversations about tough subjects.

Think about where you can broach tough subjects – for example the office water cooler (make sure it’s private), a stairwell, a coffee shop, on the way to work, a park etc.

2. The role of data in decision making & conflict resolution

While in New York I attended  Gender Equality, Data and Decision Making put on by Equal Measures 2030.

‘What do policymakers really think and know about gender equality?’

Equal Measures 2030 shared results of a study asking 109 policy makes in 5 countries about the state of women in the labour force, maternal deaths etc. which were shocking. Policy makers … the folks making the policies & the laws that influence these things … were woefully uninformed.

Talk about a data gap.

Even worse was the policy maker’s perception of maternal mortality. You can see in the graph below that 94% of responses were more than 20% off the correct answer. Oy! 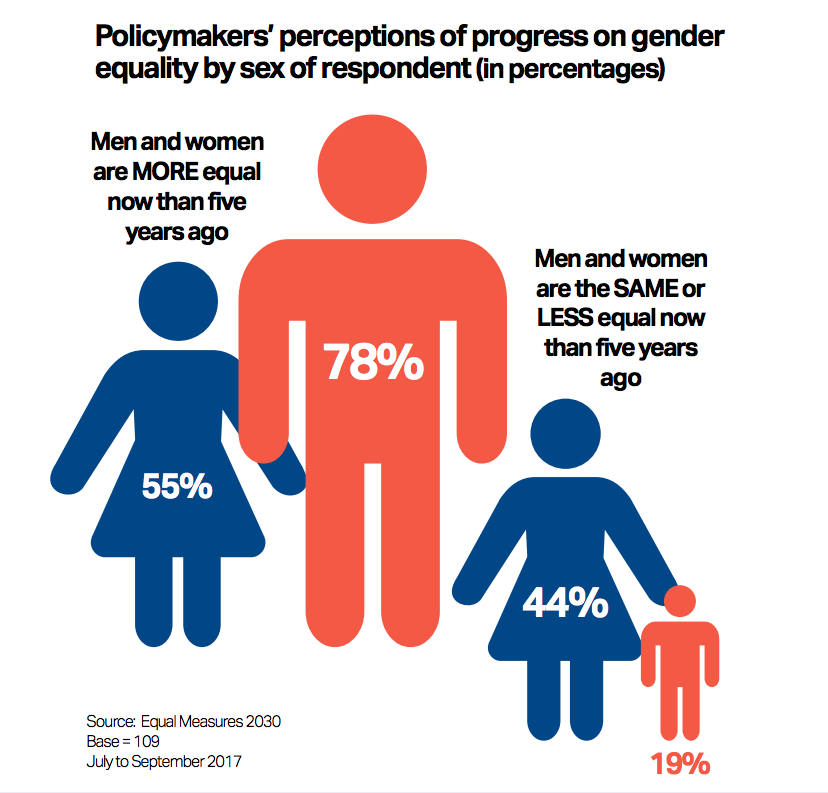 The challenge in resolving the conflicts of maternal death, women in the labour force & other gender based issues becomes one of starting with the right data.   The results of this survey waves a giant flag for where to focus advocacy efforts – in this case education.

How you can use data in decision making & con res

Conflict makes us want to fight, flee or freeze, all of which are not ideal for well thought out conflict resolution processes but are ideal growing ground for assumption making, jumping to conclusions, posturing & narrowing one’s view, sometimes to the width of a pinprick.

Next time you’re in a conflict setting take multiple deep breaths & ask yourself what data you need to move forward. How can you gather more information? More facts? Who do you need to talk to in order to get a fuller picture? What research can you do to get more informed?

So open your fan & add a couple of new techniques. Brush by’s (‘accidentally’ & informally meeting up with the person you’re having conflict with) & pressing pause to gather more data are two tools that will help move a stuck, stalled conflict towards smooth sailing.

This week I’m in Mauritius, attending & presenting at the eLearning Africa conference. I’ll share some of my learnings next week’s post.

Until then, save yourself from banging your head against your computer screen in frustration when a tenacious conflict arises & first open your fan & look for more options to resolve a conflict (including gathering more info).