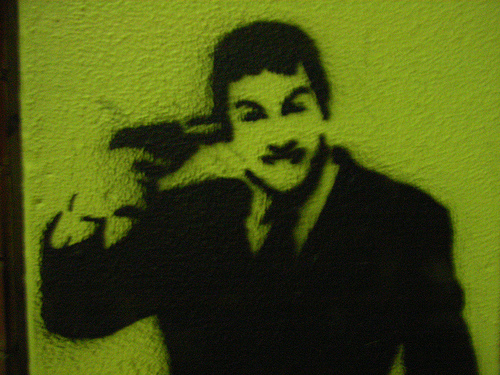 You know your day is not going to go well when it starts off with a phone call from a client saying:“Uh, er, is your website supposed to have a picture of people with guns on it?”

Turns out our website was hacked, which, apologies to regular readers, is why there was no blog post on Friday.  Instead of our regular homepage readers were ‘treated’ to a black background with a picture of people in green pointing guns at the reader.  Nice.  Not.

(And no, the above picture isn’t the image the hacker used.  I didn’t want to give the hacker the privilege of appearing on my blog.)

Because you, my dear reader, are never far from my mind, I wondered how I could turn this frankly incredibly annoying situation, into a blog post.  So here goes, 3 ways to deal with participant hackers.

The dictionary defines a computer hacker as ‘someone who uses computers to gain unauthorized access to data’. I have a more decisive description.  A hacker is someone with far too much time on their hands, who has the morals of a toilet bowl, who chooses to use their powers to make other people’s lives a temporary mess.

A hacker participant then is someone in your training workshop who, despite your best efforts, despite your setting the best laid sumptuous smorgasbord of learning opportunities, chooses not only to disengage but tries to take the whole group with them and show you up in the process.

Ever had one hacker participant?  In my decades of training experience I’ve had a few and I always find them fascinating, like a rare breed who’s just been discovered.

Here’s how to recognize when you’ve got such a specimen in your workshop:

Here’s what to do if you recognize said specimen in one of your groups – try and figure out what their motivation is:

Finding out what’s motivating them can help with figuring out how to proceed.

With that in mind here are three tips for handling hacker training participants … because handle them you must.  The group is looking to you for action.  When one participant is negatively affecting the whole group standing idly by is NOT an option.

So hacker, whoever you are, thanks for the opportunity to look at hacker training participants as the muse for this blog post.

If you have any techniques for dealing with hacker participants I would love to hear them. Bring ’em on.