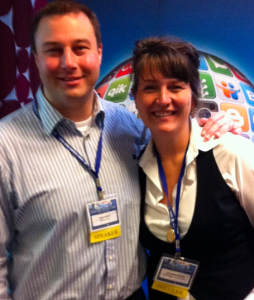 This article was originally published in our free, monthly online newsletter.

Read the entire newsletter here & get free resources {both serious & tongue in cheek} or download a hard copy of the article.  Not already receiving our free monthly newsletters? Whatsamatter you?  Sign up  here.

Mike Volpe (that’s him & I pictured above) is as engaging in person as the company he’s Chief Marketing Officer for, HubSpot.  I recently interviewed him when we were presenting at the same Social Media Strategies Summit conference in London, England.

Social media is one of those topics that people either embrace, like an unlimited supply of hot fudge sundaes, or resist with a vengeance, like hourly Brazilian waxes (look it up guys).  It’s the same with participants in our learning & development circles. Sometimes you have those who embrace the content  & sometimes you have folks who resist it wholeheartedly.

1. Fear: We fear what we don’t understand so ultimately our job is to make things understandable.

Mike says, ‘I think people are often just fearful of things that they don’t understand & they’re fearful of change. I think that human beings are fundamentally social beings, & I think if you can just show people that, it’s not as scary as they think. They’ll e-mail people or talk to people on the phone. Social is really not that much different than that.’

And for L&D folk?  Like entrepreneur Marie Forleo’s mother says, ‘everything is figure-out-able.’  And a successful strategy for reducing fear & figuring things out is falling back on what our participants already know.  In the case of social media, it’s that people are ultimately & already social.

2. Change:  Change is tough.  We don’t want to be embarrassed, especially in front of other people, so sometimes it takes a more indirect approach.

I think maybe the only difference [with social media] is the potential broader reach. If you

have a little bit of a gaff & it’s you & I talking at a cocktail party, then maybe I’ve embarrassed myself in front of you. Maybe you’ll tell a couple of friends about something odd that I did. But it doesn’t end up on Google. But I think with that down side also becomes a much greater opportunity, where the good things that you do can be amplified a lot more. That’s what I think is important to focus on for people.’

When you’re trying to effect change (which is what all good L&D people do) & all else fails, Mike recommends an indirect approach.

If there’s someone in an organization where they’re maybe trying to convince the senior staff to get it – usually there’s some kind of mid-level market that’s a little bit forward looking, that’s paying attention, that’s on your list. And they’re trying to convince someone higher up. A lot of times, them going directly to the person isn’t the right route, because sometimes those senior folks like to think that the idea was their own & they’re not willing to listen to someone else internally. So the piece of advice I’ve given to some people is buy a book that talks about the topic and just leave it on that person’s desk subtly, without them knowing that it came from you. Then hopefully they’ll read the book & then they’ll get the idea themselves & then they’ll come down to your office & say, ‘We need to start doing this social media thing!” You can say, ‘Oh really? That’s a great idea!’

And for L&D folk?  Sow seeds, be indirect & be subtle.

One of HubSpot’s recent blog posts is ‘how social media is a lot like sex’.  It’s a great example of using effective L&D techniques such as:

And for L&D folk? Check out their post & see examples of the above strategies, then use them with your particular subject matter expertise.

Marketing today is no longer about interrupting people with a message about why they should buy your product. It’s about how you can be the thing that people are interested in. That, to me, is education. People love to learn, they’re always looking to better themselves both personally & within their careers. So our marketing is highly educational and there’s lots of things that we do – webinars & videos & eBooks.

And for L&D folk? Just like marketing, learning & development isn’t about interrupting people anymore.   Increasingly people select not only what they want to learn but how & when.

When I asked Mike for an example of his favourite educational marketing tools he talked about marketing.grader.com

You put in your company or your competitors & compare them. It’ll give you a grade but it also educates you about why you got that score & what are the things you can do to improve. That’s been used by over four million businesses to evaluate their marketing. What’s neat about that is it’s also highly personalized & customized. It kind of assesses where you’re at & says ‘here’s the educational plan for you’.

And for L&D folk? Check it out, both for the marketing advice (it’s very cool, trust me) but also for the great L&D principles at play. (By the way, don’t put ‘www’ in front of it, it won’t work).

There’s an element of cheekiness to HubSpot, which helps people’s barriers come down.   When I asked Mike to expand on this he said, ‘I think humour is definitely one way. I also think just being human as well. We try to have most of our e-mails come from a real person at HubSpot. We try to put their photo in the bottom of the email.  We try to have people make that connection with a person.

I think what’s interesting about marketing & about sales & about education is that you’re often trying to get someone to make a change. I think that there’s a couple of dimensions to it. There’s the logical side to it & then there’s the emotional side. I think, too often, we only work on the logical side & we just try to beat people over the head with logic. That’s an important thing to do but I think we need to try & think about the emotional side as well. How can you embrace that & make it easier for people emotionally, that’s the non-logical side of decision-making.

And for L&D folk? Strategize for how you can encourage the personal, the emotional.

When I asked Mike what’s a question that people don’t ask him that they should, he said ‘I feel like they should ask what’s the secret. The answer that I wish I could give to more people is that social itself is not really a strategy. To me, it’s about what’s the content? Social is a way to amplify & build engagement around that content. I think too many people start doing social without having anything meaningful to add, or any good content there. So a lot of people just say ‘Oh I’ve heard so much about social media. I’m going to start a Twitter account & I’m going to start tweeting something’. But what they’re putting out is mostly nonsense. I think you need to think about what’s your value add. You can pick up the phone & call people but if you don’t have anything valuable to say, they’re going to hang up on you. The equivalent of that on Twitter is that they’re not going to follow you. They’re not going to pay attention to your message.

What is the value that you’re adding to the Internet? What is your unique value proposition compared to the rest of the information out there? If you get that right, I think that you’re much more likely to be successful at social.

And there you have it, wise words from Mike Volpe.  If his last point doesn’t have you recognizing yourself (whatsamatter you!), let me shed some light.  We, as learning & development professionals are all about great content.  In that vein, we’re one step ahead of, ahem, marketers.