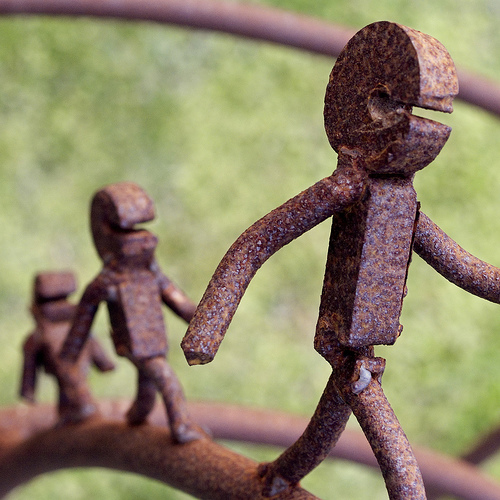 It’s one of those iffy training exercises.  Asking a North American audience to use their bodies to form a picture is risky.  Eyebrows tend to head north.  Question marks (or the equivalent, #$@#$!) dance above participant’s heads.

We North Americans, especially corporate North America tend to divide our brain from the rest of our body.  There’s a clear delineation and rarely the two shall mix.

On this particular day, gathered with some 70 folk, towards the end of a training I decided to do it.  After getting them into smaller groups of three I said …

To reassure the group I joked that they didn’t have to touch if they didn’t want to.  We weren’t going to hug and kiss and sign Kumbaya.  I encouraged all members in their small groups to participate.  In advance, I told them they’d be showing one other group their pictures.

After a few minutes the raised eyebrows calmed down and the groups got to work creating their sculptures (notice I didn’t use that word, it likely would have been too intimidating).

At my signal each group quietly demoed their pictures to another group – one at a time, without speaking.

Past flowed into present which merged into future.

Then they switched.  The presenters then became audience and the partner groups reciprocated.

A participant came up to me and with a gleam in her eye said that her group wanted to see everyone‘s pictures and asked if they could all demo.

I made a snap decision and told the large group what the request was.  I asked them to form a large circle and following my lead as a I slowly pointed around the circle, to form their first picture.  I acknowledged that were were improvising and gave them an out – making it clear that they were free to pass if they didn’t want to participate in front of the large group.

After a moment of silence to let it all sink in I quietly started to my left and began swinging my arm around the circle.  Slowly sculptures formed and then unformed as my arm swept past.  Pictures of the past kept emerging, rippling out of each other.

When I got to the end of the circle I doubled back quietly reminding the group to form their ‘present’ pictures.  Again, sculptures unfolded quietly.

Finally a third round brought us sculptures of the future.

It was quiet when we finished.

I closed the workshop and encouraged them to continue dialogue about what they’d seen, to approach their colleagues and ask them about their pictures.

I encouraged them to look for differences that made a difference and similarities that were significant.

In fact it was pretty darn cool.  I loved the improv element that a participant brought to an old activity, one that I’d learned decades ago while working in the Philippines.  It’s called Moving Pictures.  Feel free to use it (crediting the source is always appreciated) and let me know how it goes.