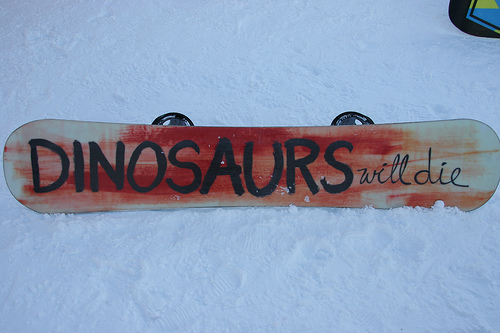 A while back I listened as Arlene Dickinson kept a large audience rapt with her business successes and her trials and tribulations.  She’s the only woman on the wildly successful Dragon’s Den, “where aspiring entrepreneurs pitch their business concepts and products to a panel of Canadian business moguls who have the cash and the know-how make it happen.”

Arlene talked of years ago, riding up a ski lift with a young looking guy who was carrying a ‘weird looking board’.  They chatted.  The guy gave her his card as he wanted her marketing help.

Her thoughts?  This will never fly.  There’s no way these things are going to be allowed on the mountain.  No way, uh uh.

The weird looking board turned out to be none other than a Burton snowboard, a company which has been ‘standing sideways since ’77’.  Burton built the worlds first snowboard factory and is now the largest snowboard brand in the world.

What I love about Arlene’s story is that she goofed and kept going.  Sure she has regret but none larger than the regret if she hadn’t pushed forward, as a single mom and hadn’t built a successful business.  The Burton regret is peanuts by comparison.

Instead of regret being a measure of what we didn’t do and what we missed, perhaps regret should be seen as an indicator of a life fully lived, of chances taken, of new paths forged through densely shrouded forest.

If you don’t have regrets maybe you’re not stretching enough and playing it too safe.

Regrets don’t have to mean what we missed out on but rather can be a measure that we took chances, reached for the gold ring, tried new and scarily different things.  We should aim for more regrets.  While some ideas will go sideways (ergo the regret) lots more will be successful.

What do you regret?  What does your regret indicate?