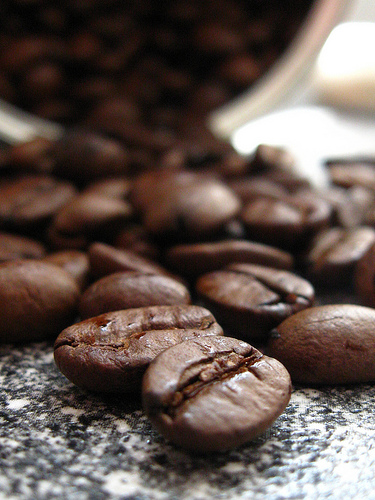 George Moen, the President of Blenz, recently spoke to a group I belong to, the Forum for Women Entrepreneurs E-series program, and as I chuckled through his engaging presentation, I learned these four lessons about business.

1. Look to your roots

When George was a wee lad of 11 he managed to get a gaggle of friends to pick fruit from abandoned fruit trees, which they then sold door to door.  George took 50% of the profits for his (and their) trouble.  That enterprising spirit has served him well more than a few decades later as the owner/president of several franchises including Sandwich Tree and Blenz Coffee.

It made me remember when I was about the same age and I picked boxwood to sell to local florists.  While other kids were reading comic books I was busy securing clients, managing my inventory and having a hoot selling, that is with the exception of the day that my little brother turned over the canoe that I was transporting the boxwood down the lake in, where I wailed as my hard picked product floated away.

Often the seeds of future success can be found in what we naturally did well at when we were young.  What do the seeds of your youth tell you about your strengths and passion?

“If you can move your lips and especially if you’re a parent, you’re a salesperson,” says George.  Convincing little ones that it is indeed bedtime and better yet, time to visit the sleep fairy, takes some mighty sales techniques.  While sales often get a bad rap (being interrupted by annoying sales calls at dinner), being able to find a need and fill it by selling a product or service is a gift.

With the advent of social media we’re often ‘selling’ our reputations, our knowledge and our experience.

What are you selling and how do you feel about that?

3. People with problems are a good thing

“I like people with problems.  If people don’t have problems it means they haven’t tried hard enough.  I don’t want to be their first failure,” was probably the wisest thing George said that night.

Those who don’t have failures to look back on often live in a safe, protected environment where they haven’t ever jumped gleefully out of the box and really pushed themselves to try something different and difficult.

When you’re looking to hire do you actively look for people with problems like George does?

4. Find a unique niche and fill it

Starbucks goes into countries where initially folks don’t believe that people will pay up to a 1/2 a day’s wage for a cup of coffee.  After they are successful with the concept however people wanting to franchise come calling … and are turned away because Starbucks doesn’t franchise.

Blenz does franchise and George says they count on getting a call about a year after Starbucks has entered a new market, from folks wanting to franchise.  Now that’s clever.  That’s finding a unique niche and filling it.

What’s your unique niche?  What need are you filling?

Who knew an evening of learning about picking fruit, relating bedtime to selling, actively seeking out problems and finding unique niches could be so entertaining.  Thanks George.