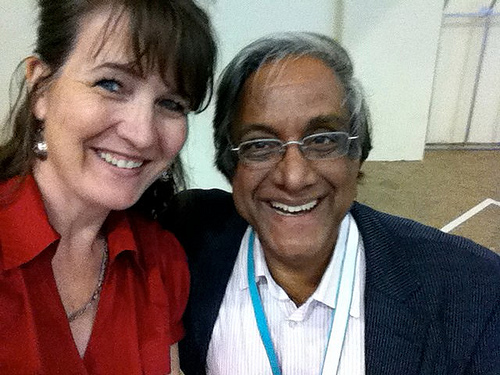 Recently I co-hosted AIESEC’s Youth to Business Forum where 500 delegates came from 110 countries to engage, inspire and take action on three tracks: innovation, corporate responsibility and leadership.  That’s my co-host Krishnan Ananthakrishnan, from UNHABITAT, and I above.

It was a real honour to meet some of the delegates and key speakers.  Here are some highlights of what the speakers had to say. 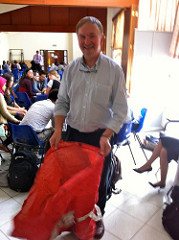 Chris Weeks, Director for Humanitarian Affairs, DHL and what he said about corporate responsibility

(that’s his smiling mug on the left)

Chris is an extremely engaging and modest guy.  He walks the fine and sticky line of corporate responsiblity with humour and humbleness.

‘Stick to what you know best’ is his advice.

In DHL’s case, that’s airport logistics.  They use their transport bags, which they have by the tens of thousands (see red bag at left), to fill and transport supplies – going so far as to have them dropped out of US helicopters to those in need.

‘Good intentions aren’t enough’ he says, relaying the case of an airline that encouraged citizens to fill shoeboxes with aspirin, milk, sugar, soap and other necessities.  500 tons later there was a major problem – the shoeboxes had been allowed to get wet and everything was a sopping mess which then had to be re-sorted, packaged and distributed.  Much had to be thrown out.

‘If you don’t measure you can’t manage’ Chris says, advising that being on top of what you’re doing, having a monitoring and evaluation strategy in place is key.

Wise words from an interesting guy.  What does it prompt you to do regarding corporate responsibility?

Watch for the next two posts about: