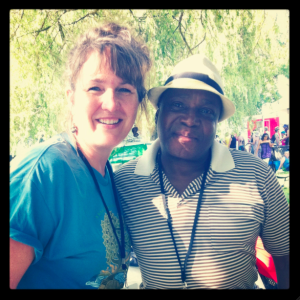 In this month’s Rock.Paper.Scissors’ newsletter I interview Mozambican treasure, the musician Wazimbo & get his thoughts on culture, change & creativity.  (That’s he & I above.)  Stay tuned for the next blog post where I’ll share some resources related to those themes, both serious & tongue in cheek.

Read the entire newsletter here or download a hard copy of the article.  Not already receiving our free monthly newsletters?  Whatsamatter you?  Sign up  here.

‘Is it natural that men with big bellies decide everything?’ An interview with Mozambican artist Wazimbo

Mozambique.  An island off the coast of Africa?  While that’s what one person answered when I asked them about Mozambique, nope, that’s Madagascar.
One of the weakest economies in the world? Yes … if it was 1975. One of the strongest economies in the world today? Yes.  Mozambique, which gained independence from Portugal in 1975, is also home to Wazimbo, an artist & musician who I had the good fortune to interview recently.  Here are his thoughts on culture, change, power, creativity & his advice for how to effect positive change in the world.  Settle in & enjoy.
On Culture
Lee-Anne: There’s been a huge cultural shift in Mozambique, lots of changes of course from colonialism & lots of different things happening with different cultures. How do you use your music to keep your culture strong? How does a country keep its culture strong?
Wazimbo: Our culture is very, very strong because the people were starving for peace & to take the land back from the colonizers. And the culture was very, very strong, to keep that identity. So that’s why, until now, it’s a part of that process. We kept that energy. The same energy that Mozambicans have to gain independence.
How it applies: Culture, including organizational culture, can be defined both by what it is & by what it isn’t.  In Wazimbo’s case the fire & energy necessary for preserving identity moved mountains.  What is there about your culture that you’re willing to preserve, promote & fight for?
On Power

Wazimbo:  As a musician and a creative person, I wrote this song based on everything that surrounds me. Especially because those people with power, they have corruption. They start to create a big belly. You know the African with a big belly! Then, after that, they leave. They’ve got the power. The thing you see in the men who have the power is that most of them have big houses. I wrote that song and based it on that experience. It’s a way to identify the corruptors.  And if you’ve got the money you’ve got the power.

How it applies: Who has the ‘big belly’ in your world? Where is the power concentrated?  Have you identified its sources & how it impacts you?

Lee-Anne: What are some of the sources of your creativity?

Wazimbo: I am part of a long process. You learn something – I was born during the Communist period of Mozambique so I saw the transition from one point to another point, to the new government in Mozambique. So that was one school. I learned something. So after that, there was another period after the civil war. So those things inspired me to change and to become more creative and to bring new ideas for his music. So now I use new technology and everything has changed so that helps me be more creative.

How it applies: I really enjoyed hearing Wazimbo referring to different parts of his life experience as ‘schools’ of creativity.  If you divided up your life into different schools what would the schools be called?  What’s the main lesson you learned from each one?

Lee-Anne: What advice would you give to people that are trying to do good things, to effect positive change in the world?

Wazimbo: It’s hard to change the world. It’s hard to make the world different. That takes time. Even Jesus Chris, he tried and people rejected him. That’s why he was crucified. So it means that all musicians are trying to do, is they’re trying their best. My advice is never give up. Never give up because you can do something. Even if you don’t change the entire world, you can do something.

How it applies: There’s times when working for change comes easily & smoothly & other times when it’s like pushing a mammoth boulder up a hill. What does doing your best to affect change mean to you?  What can you do for yourself when you’re tempted to give up?

As the branches of a huge willow tree draped themselves gracefully around us, while providing much welcomed shade, I wistfully said good-bye to Wazimbo, knowing his wise words about culture, change, power, creativity & advice would stay with me for some time.

Now, as I finish writing this article, I know that to be true & hope it’s true for you as well. As for me, I’m going to listen to his hauntingly beautiful song “Nwahulwana” for the umpteenth time.

Note: if you’re interested in finding out more about the first democratically elected President of Mozambique, the incomparable Honourable Joaquim Chissano, check out my interview with him from a while back: