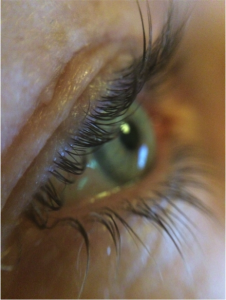 Last week I made the case for Why You Need To See Anew & Find Another Perspective.

Even though you know all this, you still find yourself banging your head against the wall when that frustrating colleague is late with his report … again.

And you still find yourself reacting the same ol’ same ol’ way to your partner when he forgets to bring home the milk like he said he would …. again.

Even though you know it’s important to take another look, to gain a new perspective I can be tough to actually do that.

But it doesn’t have to be.

Here are 5 simple approaches to enlarging your perspective, to finding novel ways to solve pesky problems.

What to do with your biases? Search for the boundaries of your perspective. Put another way ask yourself how your culture affects your worldview. An easy way to realize the effects of culture is to examine your relationship with time. Is time a commodity, something that can be diced, shaved, saved, banked? Or is it a fluid, more liquid concept? Your answer will have a direct relationship with your culture

For example, why do we say ‘the light bulb went off’ to describe when inspiration hits but the picture of the light bulb is always on & the scene is full of light. It should be the opposite. If a light bulb goes off, it should be dark, like this Moen ad, which beautifully turns an assumption on its head. 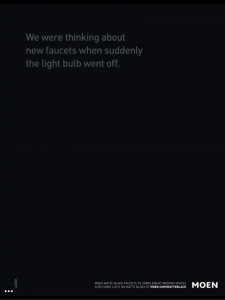 When you’re up against the wall of a pernicious problem seek out the assumptions you are making. Once you identify them, alternative options arise more easily.

I’ll write more about this next week, how I discovered a really, truly magical kingdom right in front of my face.  In the meantime next time a problem is staring you down, stare right back & look for resources that may just be hiding in plain sight. 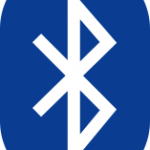 Next time you bump up against a challenge look behind you, behind the problem. Dig deeper beyond first impressions, look for options, for alternatives. Look for the story.

Case in point. We’d been on safari with our camping clan (yes that’s us & yes that’s a lion walking between the tents). My dear friend Sarah, who’s not too keen on safari camping especially after the lion visit, pulled out an IPad & started to read some magazines. That & some vino kept her mind off said lion. 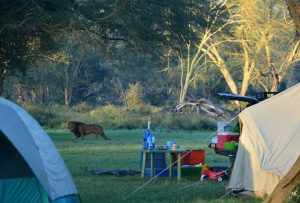 Because I prefer reading books in print (not online) I made the mistake of assuming magazines had to be read the same way. Not so. Since that safari I’ve had a subscription to Texture, which gives me access to hundreds of magazines every month. Now that’s my kinda bliss – bite size learning, on the go & always accessible. It only came about though because I saw someone using an alternative way to read a print magazine.

So the next time you find yourself banging your head against the wall with a pesky problem, practice gaining a new perspective by: realize your biases, take a hard look at your assumptions, look in front of you, look behind you & look anew.

Need a practical way to practice? In two weeks I’ll share a super fun, easy, creative way to do just that. In the meantime be thinking of a pesky problem that you need to see anew with some new perspective.