How do you get creative? Why use a mosha cup of course 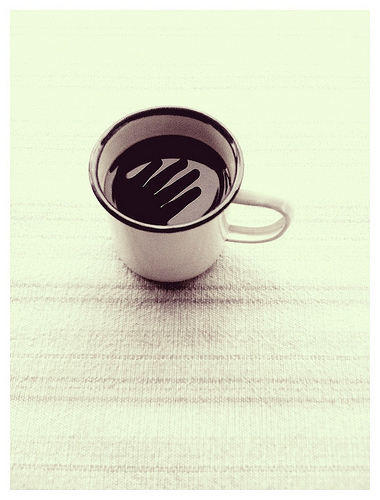 I was driving to pick up my hubbie from the airport and listening to Stuart McLean’s the Vinyl Cafe on CBC radio.  The tunes were great and I was bopping and singing along, a great big grin plastered wide on my face.

Stuart was relaying his tales of growing up in Montreal, and, as only he can, making the mundane magical.  He talked of being a young boy many years ago and holding a precious, crumpled one dollar bill which he carefully carried to the local record store.  Once there he asked for the Mosha Cup record.

‘Say what?’ the store owner asked.

Finally the store owner got another employee and together they listened to what Stuart wanted.  Eventually a light bulb went off, a record was sold and Stuart walked out of the store listening to the men laughing.

He didn’t get the joke until he peered carefully at the record label and then his light bulb went off.

And so it is with creativity.

Our brains like to fill the knowledge gap, we like to have answers that sate our curiousity.  The problem is, when we’re trying to be creative, the answer itself can wreak havoc.

Once we have ‘THE ANSWER’ it prevents us from looking for other solutions.  Once we label something one way, we’re less likely to see it another.  A mosha cup is a mosha cup and could only be a mosha cup.

This happens a lot.  For years I thought the song lyrics to ‘Lay Down Sally’ by Eric Clapton were ‘Way Down South’.  When questioned I was pretty vehement in my defense of the ‘right’ answer.  I simply couldn’t fathom it another way.

And that’s the kicker.  How to fathom things in other ways.  How to identify and strip away the constricting bonds from our thinking and look at things differently.

Know what Stuart’s record was?  Here are some hints:

Still no idea?  Check the song out here.

Want learn how to look at things differently and ramp up your own creativity?  Check out the ‘Embracing Creativity; How to Rediscover your Creative DNA’ course I’m teaching at Langara College in Vancouver, B.C. on June 23rd.  Hope to see you there with or without your mosha cup!