If curiousity killed the cat, look what it (+ creativty) did to the chimp! 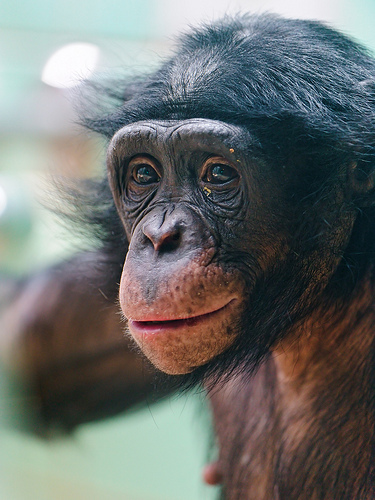 Being a professional trainer, I’m pretty particular when I go to see someone speak.  At a recent WING night (Women’s International Networking Group), here in Nairobi, I had the delightful pleasure of hearing Doug Cress speak, the head of GRASP (the UN’s Great Apes Survival Partnership).

He was fantastic – informative, engaging & funny.

We share an astonishing 99.4% of our DNA with chimps (one of the four great apes).  I’m not so sure we’re as creative though.

Imagine yourself in a chimp’s cage with a coveted peanut at the bottom of an (unbreakable) glass tube that’s too large to stick your hand down & is bolted down (so you can’t shake the peanut out).  Using only your wits & what would typically be in a chimp’s cage, could you figure out how to get the peanut?

Check out the video below.

Creativity to the max.  (I was so impressed with his talk & the chimps that I’m over the moon excited to have booked a trip to see them in a week!)

Hint: the chimps (many chimps figure out the trick) use one of the techniques in my creativity classes, which are called E.S.C.A.P.E., where the A stands for assumptions.  What assumptions might you be making that is hindering your ability to get to the peanut?

Remember I talked about assumptions above?  Figuring out what assumptions you’re making & busting them are a huge help when we’re trying to be more creative.

In the chimp’s case she broke the assumption that she had to be the force to move the peanut (e.g. breaking the tube, shaking it, sucking it up etc).  Instead, she used the power of water.