Don't Perform in an Exit! A true story from a professional improv comedian 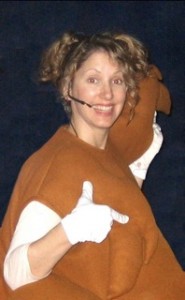 Did you know that Rock.Paper.Scissors Inc. is both a training and entertainment company?

In this issue Diana Frances, VP of Rock.Paper.Scissors Inc. & Director of Entertainment, pulls back the curtain on 4 lessons you can learn from life as a professional improv comedian.  There she is above – dressed as a chicken (all in a day’s work as an improviser)!  In Diana’s words…

People often want to know what it’s like making people laugh for a living. I’m not going to lie. IT’S FREAKING GREAT (when it goes well)! But when it goes bad, it goes reeeeal bad.

Thankfully, after doing improv professionally for corporate companies for as long as I have, I’ve become really good at making sure I never have a bad day; and I only hire other talented improvisers who rarely if ever have bad days. But sometimes we’re at the mercy of bad lighting, a terrible sound system, bad seating or a live auction that goes on too long and sucks the life out of the audience. These things are tricky to control and can result in a less than stellar event.

That said, those tough shows make you better and teach you how to guide the next client into organizing a problem free event. It also gives birth to great ‘hell gig’ stories. In the world of improvisers, ‘hell gig’ stories are the most fun to tell. We rarely share them with civilians, but for you I’ll make an exception.

Warning – this story contains one naughty word and involves the elderly.   It’s a story of a challenging time I once had performing at a retirement home. The seniors at the home were wonderful; the situation that both they and us were put in was not.

Early in my professional career (a.k.a. 20 years ago), I was given a grant to fund an improv tour that went to retirement homes to educate and entertain seniors about the dangers of smoking. (Because that’s what you want when you’re in your twilight years – a sassy comedy lesson from a bunch of 20 year old jokesters).

For the most part, the shows went well. Particularly if they took place at assisted living residences where the seniors were mobile and mentally agile. However, mid-way through the tour we pulled up to what was clearly the most depressing building we’d ever seen. Most of windows had bars on them and when we entered we realized that the majority of the building was actually underground, much like the terrible basement suite I was living in at the time.

The nurses brought us to the activity room, where 20 seniors were waiting for us. But instead of creating a row of chairs for the audience and a performance area for us, the seniors had been situated in lazy-boy chairs, which were lined up around all 4 walls of the room, forcing us to either perform in the doorway, or in the middle of the room where we would be doing theatre in the round. We opted for the doorway.

The nurses immediately took off for a smoke break and we knew we were in trouble. This was not a typical retirement home – this was an extended care facility for people with dementia.

No one understood what we were doing. One lady kept asking if we were going to play the piano. Another was busy feeding pieces of a banana to an old-fashioned doll. Another woman rocked back and forth singing ‘The Green Green Grass of Home.’

We were young, and being paid to perform, so we performed. All of our scenes were about the ‘Green Green Grass of Home’ since asking for suggestions was out of the question. (Improv comedy incorporates audience suggestions into on-the-spot made up scenes.)

As we bravely launched into our third scene about green grass, I noticed an elderly man directly across from the doorway we were performing in. He was staring intently at us and seemed to understand what we were trying to do. We were about to discover that inability to walk did not hinder his mobility.

Suddenly he decided he’d had enough of these youngster’s shenanigans, because he yelled, ‘THIS IS BULLSH*T’ and pushed himself out of his lazy-boy chair. He was so keen to get away from our improv that he started dragging his body across the room and through the doorway we were performing in.

We were stunned.  As I was young and committed to the scene, I turned to my improv partner and said, ‘Wow. This green grass sure does attract some mighty powerful slugs.’

So what did I learn from this experience that I have since applied to corporate improv shows?

So there you have it, a sneak peak from behind the stage curtain.  And what does it mean for you and your work?