Intercultural communication- When up is down & down is up 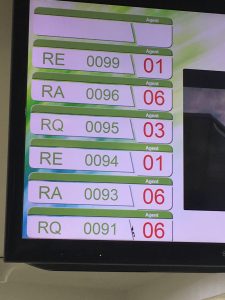 Have you ever been in a situation where up seemed down & vice versa, where the ‘rules’ didn’t seem to apply?

As I was waiting to upgrade my mobile phone chip recently I looked down at the ticket stub the agent had given me to indicate where I was in the queue – number 098. I looked up at the screen that listed the numbers (pictured above). I looked down again. Back up. My number was nowhere to be found.

I waited a minute. Checked the screen again. Same story.

Puzzled, I then had an even more puzzling talk with the clerk.

Then the penny dropped.

I was expecting my number to appear at the bottom of the list & move up the closer I was to being served.

Nuh uh. Numbers appear at the top, only when it’s your turn to be served & move down the list after you’re served.

And so it goes, living in a culture that I wasn’t born into. As a transplanted Canadian living in Kenya, I frequently don’t understand what’s going on around me (& that isn’t just because I don’t speak Swahili).

This cultural balancing act can be confusing & frustrating, but ultimately fascinating. It boils down to building my intercultural resilience muscles.

Does a fish see the water it swims in?

Culture is so big we often can’t see it (especially if we’re surrounded by those who have a similar culture).

Some components of culture ….

Culture is made up of a ton of elements, such as:

Defining culture broadly, like above, means that almost every communication is an intercultural communication. For example;

Even though almost every communication is an intercultural communication, culture is rarely at the centre of our awareness when we’re communicating.

So how do we put culture in the centre of our communications?

You can improve your intercultural communication skills by focusing more on the right hand column below than the left. 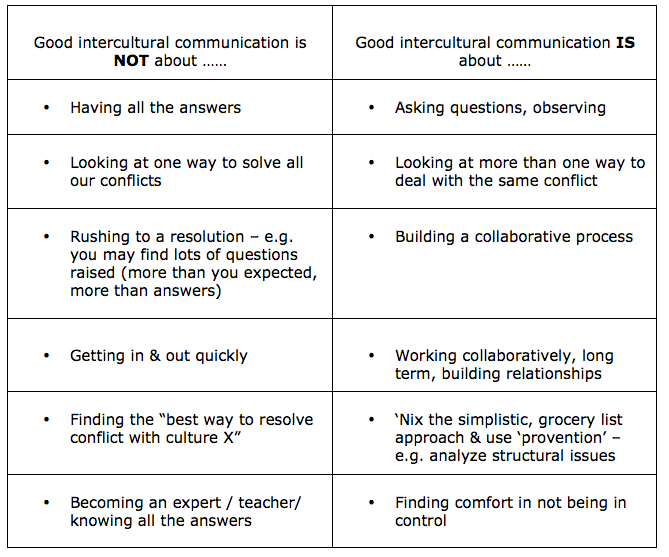 So the next time you find yourself in a situation where up is down and down is up, consider the role that culture is playing. And move forward by asking lots of questions, observing, finding more than one way to deal with the situation, working collaboratively and staying away from a simplistic grocery list approach. It’s not easy but it’s always interesting.