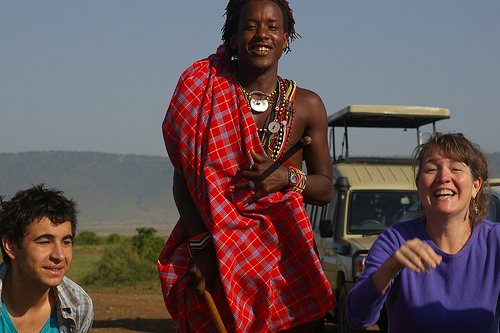 ‘A Maasai without their culture is like a zebra without its stripes,’ said Leteipa, our Maasai guide in the Mara for the last couple of days.

The Mara (as the Maasai Mara) is known to locals here in Kenya is some 16,000 square kilometers.  Loads of space for learning, musing & having a blast.  I just came back from a couple of days there.  Here’s what I learned:

– I learned that leaping straight into the air, as the Maasai do for their dance, is harder than it looks.  That’s me above with Leteipa practicing.  (And us laughing at my attempts below.) 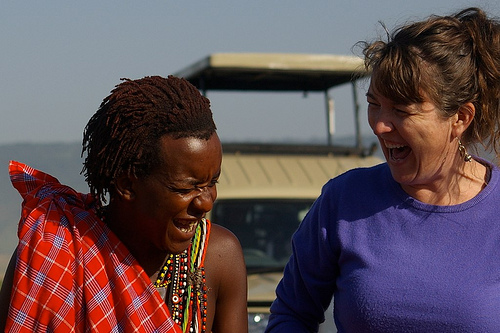 – I learned that Leteipa, whose father has 8 wives & 28 children, calls all his mothers ‘mom’

– I learned that the distance between traditional culture & ‘modern’ cultures can be bridged elegantly.   For example Leteipa  values formal education greatly & continues to enjoy his morning breakfast of cow’s blood mixed with milk.

– I learned that my intuition can be bang on.  When my camera batteries died & I couldn’t recharge them, making taking pictures impossible, I said, that for sure we’d see a leopard on that afternoon’s safari and …. we did … a baby one.  After 20 some safaris I finally saw a leopard.

– I learned that experiencing that baby leopard was sweetest without the camera lens in front of my face.

– I learned that babies, even leopard babies, love to explore, as this one meandered down the road in right front of our car.   And I learned that mama’s aren’t always visible but are always on the scene – as we searched in vain for the mama we knew was near but couldn’t see.

– I learned that taking a deep breath of appreciation & gratitude, as we watched lion cubs frolic with their mama a scant few metres away from our car, is good for the soul

– I learned that the smallest distance between several cultures is measured in music & dance, as we spent a fabulous evening dancing with Leteipa & hosts – both to traditional African songs & North American songs.

With the sound of the rushing river at our feet, the grumblings of hippos as they settled in to feed for the night, the soft glow of candle light reflecting our ear to ear grins, our bellies full from a good meal, all was well in the world.

Finally I learned that the bridge between Canadian culture & Maasai culture is at once long & short, so any mistakes or misinterpretations of the above rest entirely on my shoulders