The Rock.Paper.Scissors newsletter is out: Rethinking cubicles & classrooms: matching how our brains work with how business & boardrooms could work 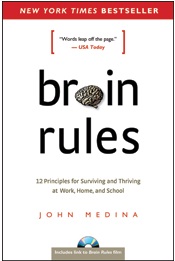 This month’s Rock.Paper.Scissors’ newsletter reviews John Medina’s Brain Rules book.  See the entire newsletter here, including a bunch of related resources and/or read the book review below.
What is ‘easily the most sophisticated information transfer system on earth?’

Our brains were originally ‘designed to solve problems related to surviving in unstable outdoor environments and to do so in nearly constant motion,’ says John.   If we were going to design environments that deliberately hobble our abilities and work against the brain, classrooms and cubicles would take the grand prize.

Most of us have no idea how our brain works … and that has strange consequences.  This self-described nice guy[1] & grumpy scientist lays out 12 rules for how our brains work & the implications of those workings.  The M.G.T. or Medina Grump Factor ensures he doesn’t quote any studies that haven’t passed his (very) rigorous standards.

Brain Rules book is peppered with humourous twists that peek inside the workings of your gray matter with glee.  Here are highlights for 7 of John’s Brain Rules.

What can decrease your risk for general dementia by 50% and decrease your chances of getting Alzheimer’s by a whopping 60%?  Exercise.  Physical activity is cognitive candy.  Our ancestors were used to walking 12 miles … per day and before you think you have to measure up to those standards, exercising a mere 2 times per week can effect the changes he’s talking about.

Better attention always means better learning.  If that’s not something to make your ears perk up, John says that, because we don’t pay attention to boring things, ‘if keeping someone’s attention in a lecture was a business, it would have an 80% failure rate’.

What grabs our attention?

And being able to pay attention to several things at once?  Turns out multitasking is a myth.  It is biologically impossible for us to multitask.  What we call multitasking is task switching or jumping from one thing to another and back again.  Yet we persist in thinking we’re great multitaskers, even though interruptions make us take 50% longer to complete a task and with 50% more mistakes.

And the younger generation, what with their IPhones, IPads, Facebook, and Twitter universes?  They’re simply faster at task switching.

When we came out of the trees it was with a sign on our backs saying ‘eat me, I’m prey.’  Historically we gave up stability (hanging out in trees all day) to adapt to variation. And so began our march towards to being ‘increasingly allergic to inflexibility & stupidity.’

What management strategy will improve performance 34% in 26 minutes?  Sleep.  That’s why some progressive companies encourage napping on company time.

If we sleep well we think well.

Conversely, the nap zone (that sleepy time mid-afternoon that all trainers dread) is literally fatal.  There is no other time of day when there are more traffic accidents.  Sleep loss hurts attention, executive function, memory, mood, reasoning and math.

Why do we sleep?  To learn.  Rats who learn a maze pattern by day, replay the same maze thousands of times in their sleep.  And if they are interrupted & not allowed to do that replay in their sleep they don’t remember the maze the next day.

Why does stress cause some of us to go off the deep end while others maintain their equanimity?  It comes down to control.  The more loss of control we perceive the more severely we experience stress.

Historically our stressful survival issues were resolved in seconds (evade charging lion or be eaten) but now stressful incidents can continue for hours, days, months and even years.  If sleep is like candy to a baby, then ongoing stress is like crack cocaine.  Stress affects learning, language, memory & concentration.  The Centres for Disease Control & Prevention say that 80% of medical expenditures are now stress related.

So what’s a stressed out person to do?  The number one successful stress strategy is regaining control.

Stimulate more of the senses and you’ll have better learning.  Learning is more effective in a multi-sensory environment … & the effect can be measured 20 years later.

Scent is particularly strong.  In one experiment vending machines that gave off a smell of chocolate increased sales by 60%.  Using the same principle, Starbucks employees are not allowed to wear perfume on the job because it interferes with the coffee olfactory experience.

Perhaps it’s because I’ve moved to Africa for a year but this one particularly caught my interest.  ‘We are natural explorers, even if the habit sometimes stings us.  The tendency is so strong, it is capable of turning us into lifelong learners.’

‘When we came down from the trees to the savannah, we did not say to ourselves, “Good lord, give me a book & a lecture & a board of directors so I can spend 10 years learning how to survive in this place.”  Our survival did not depend upon exposing ourselves to organized, pre-planned packets or information.  Our survival depended upon chaotic, reactive information-gathering experiences.  That’s why one of our best attributes is the ability to learn through a series of self-corrected ideas.’

Brain Rules is a great read if you’re in the training and development field and/or have responsibility for managing and working with people.  I join John in urging you to:

Your brain will thank you for it.