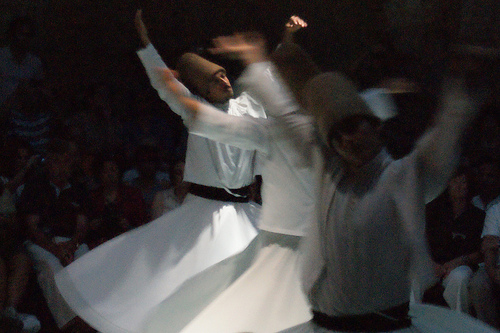 I’m in an outdoor restaurant watching folks rest up after a long day.  I’m not sure which is more responsible for the slouching against the low slung couches – the heat and humidity or perhaps not having eaten all day, for it’s the first day of Ramadan, the Islamic month of fasting.

It’s my last night in Istanbul before heading home.  I’ve been here teaching a couple of workshops on program evaluation on behalf of the United Nations.

On one side of the restaurant is an ancient cobble stone street lined with carpet and ceramic shops.  On the other is the Blue Mosque and Hagia Sophia, both set against an inky black sky, which is lightened only by the stark white seagulls which wheel about freely causing a magnificent contrast to the black velvet backdrop.  The sun has long past set and families are out and about, replenishing after fasting all day.  There’s an air of celebration in the air.

Back at the restaurant there is an ancient tradition being played out on stage.  Three musicians toss out music notes which ride the air currents with a combination of aplomb and abandon.  A whirling dervish turns rhythmically in time to the music.  While I watch, his tall, thick hat rests confidently atop his head, despite the constant turning.  With one hand facing up and one hand down, head cocked slightly to the side, he spins and spins in place, causing his long white robes to ripple and flare like the track of some ancient roller coaster.

Whirling dervishes are followers of Rumi, a 13th century mystic and poet.  The turning or whirling is part of a religious ceremony that honours God.  Placement of the hands represents both giving and receiving.

My view of the whirling dervish is somewhat obscured by the whorls of smoke from the many people smoking hookahs or water pipes.  The tendrils of smoke drift lazily wherever the air currents take them.  As an avid non-smoker I enjoy the old, romantic notion of smoke without the acrid tobacco stench for these pipes contain scents of apple, mint, lemon etc.

As I’m lulled by a sated stomach, the music and the dance, my mind wanders back to earlier in the day.  While walking past the Blue Mosque (a mere infant at only 400 years old) and near Hagia Sophia (the crone at 1600 years old) I noticed a sign for free Wi-Fi.  At first it seems incongruous but then settles in as more normal than not.  Pulling out my IPhone I found I could indeed pick up my email.

I marvel at the combination of old and new.

Like the blue tiles that gives the Blue Mosque it’s name, I wonder at what we’ve come to know about learning and development that will survive some 400 years forward.

Like the newly offered Wi-Fi at the foot of such history, I wonder at what we’ve yet to know about learning and development, or are only just coming to know.

Click on the link for a live music clip I recorded at the restaurant: Turkish music in Istanbul