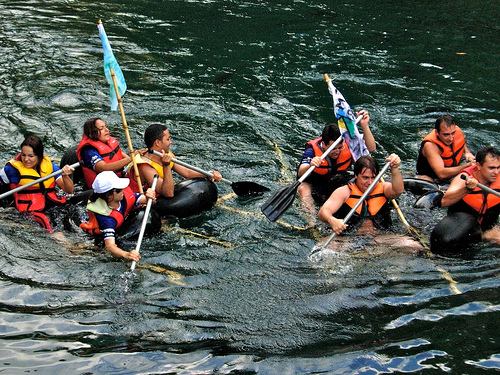 Raucous cheering filled the air which competed with the hum and thrum of the rain forest.  Wild toucans flew about the forest canopy while 6 foot long arapaima fish swam below the tangle of arms and legs that were trying to coordinate themselves down the river.

In Rio Quente, Brazil, a thermal river and water playground, I had come across 100 people participating in a Brazilian corporate teambuilding event.  I was traveling in Brazil for part vacation and part working at the United Nations World Urban Forum.

From what I could tell, not speaking the language, folks were divided into teams.  Each team was given four inner tubes, 6 long pieces of bamboo, rope and a flag.  Teams had to build a raft and paddle from one spot to another, whereupon another part of their team would take up the challenge and paddle on to another destination.

There was lots of noise – cheering, yelling, clapping and hollering.  No shy retiring folk here.  It was hilarious to watch and got me to thinking about teambuilding, Brazilian style.   Specifically, I noticed a variety of team personalities:

What I didn’t see was any particularly creative raft making.  If their goal was to get from point a to point b as quickly as possible then the most common impediment to that was the drag caused by people’s bodies being vertical in the water.

If it was me I would have encouraged my team to simply lash all the supplies together, hop in water and swim it all down the river.  Swimming would have had our bodies more horizontal, allowed for less drag and way more speed.

Now I don’t know if that would have been in the ‘rules’ but that’s what I would have encouraged.

Identifying the boxes we put around our thinking and busting them down is a great gateway to creativity.  This often includes circumventing the so called ‘rules’.

And you?  What would you have done? 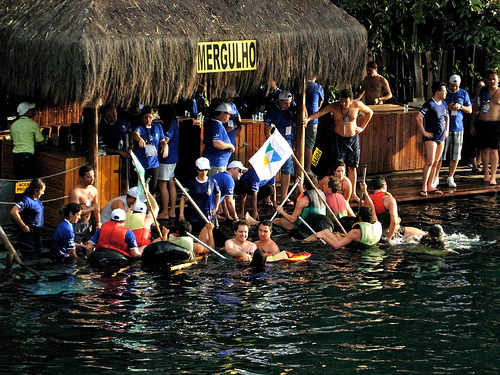