The psychology of email vrs twitter (or pigeons vrs eagles) 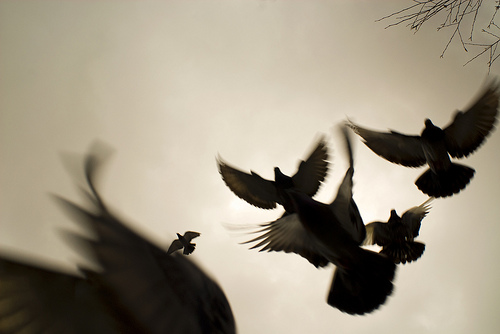 We’re really just trussed up pigeons you and I.  Yep, add a few feathers to our daily costumes and you wouldn’t be able to tell the difference between you and my fine feathered friends.

Pigeons you see (pun intended) have terrible eyesight. Pigeons bob their heads to and fro, to create movement so they can see better. They know that attention is naturally caught by movement and that’s why they artificially create it by their constantly bobbing heads.

It’s the same with email.

Email is the old guy on the block. It’s been around since the early 90’s which is a century in social media speak. It’s got no movement, no rhythm. We have to force our heads to bob up and down to pay attention to our inbox.

Get yet another email in your inbox? Sigh. Yawn. Yet another thing to do.

Enter twitter.  She be one of the new babies on the block. No forcing the head to bob here. Get a DM (direct message) or RT (retweet), now that’s something to pay attention to.

Email makes our heads bob in boredom like a pigeon, a forced paying attention, a grind of the wills.

(Kudos to Julie Szabo, my marvelous social media mentor, for the idea for this post.)