What do we call non-academic skills 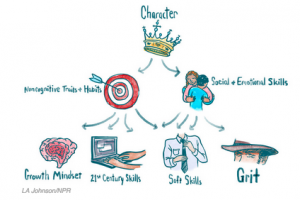 More and more people in education agree on the importance of learning stuff other than academics.

But no one agrees on what to call that “stuff”, says a great article from NPR.

What do we call non-academic skills?  You know, the ones we all intuitively know are critical but are hard to nail down.

How about social & emotional skills?  Uhm, perhaps but still vague.

I don’t have the definitive answer but I do know that the conversation is critical.