When evil licks your heels- reflections on the Nairobi, Westgate terrorist attack 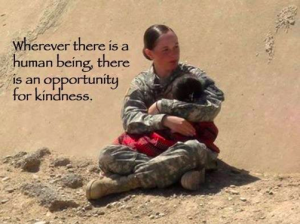 For the first time evil came (knowingly) close.  It’s licked my heels & those of friends & family.

I could see the smoke billowing from the Westgate mall terrorist attack from my kids’ school.  For days I kept glued to my phone, SMS & Facebook feed for updates.  When I saw someone I knew here in Nairobi after the attack, hugs were shared – the unspoken gratitude hanging in the air – ‘you made it, you’re alive.’

Day two of the attack my older son wanted desperately to do something.  Which led to this result..

I came to wondering why I was baring my midriff in public & desperately trying to figure out where I was.

My son wanted to donate blood so we’d headed to nearby hospital. A bit of a madhouse greeted us so offered to dig in & volunteer. Worked with the medical team to get things going smoothly. Several hrs later it was our turn.

Those of you who’ve known me a long time know I’m phobic when it comes to needles so this wasn’t easy. Managed to donate my share & then managed to pass out cold (hey at least it was after the donation). Don’t think I didn’t hear the medics telling my kid not to laugh as he watched me sprawled out!!

Seriously tho very proud of him & his friend for doing this.

Feeling embarrassed but grateful to have helped a little
in a horrible situation. Grateful too to see Nairobi hospital FULL of people from all walks of life patiently editing to donate.

Much of my attention, of course,  has been on my kids.  I posted this on my Facebook feed on day 3 of the attack …

As another day dawns in this crazy mixed up world, & as the hostages have reportedly been released & the remaining terrorists killed, I’m thinking of all of our kids during this terribly difficult time.

May the kids who were held as hostages now be held with love.

May their families get the support they need to grieve, carry on & be well.

May we all give extra love & support to our own kids as they struggle to make sense of this tragedy.

And no matter where we find ourselves on this planet may we see more connections between fellow humans than divisions.

And may we all keep our hearts soft & refuse to yield to hate.

From Bill Ursel ‘Not wanting to be a voyeur in the presence of human tragedy – however, is there any way you/RPS/colleagues in Kenya can, in time use this experience in some way to learn/empower? Excuse my feeble attempts to understand . .

After receiving an empathetic response from a dear friend in Vancouver (including empathy for the terrorists) I replied that she had more empathy than I at the moment.  I finished my email with ‘where is God in all this?’, to which she responded:

Tragic beyond words. God is in the fact that more were not killed or injured, that people sacrifice to help others, that terrible events can and do plant seeds of hope, that we know compassion, love and forgiveness exist alongside evil, destruction, pain and sorrow, that healing is possible.

Stories of hope & inspiration have sprouted like this from I Am Kenyan Project.  We will prevail because:

Little children pushed other children out of harms way. Children pulled children to safety.
Kenyan police run into harms way for us with no helmet, no bullet proof vests and regular shoes.
A Muslim man wrote a short prayer on a piece of paper for a Christian man he was hiding with and helped him to memorize it in case the terrorists asked him to say something from the Quran.
Secretary General of the Red Cross, put on a volunteers vest and went on site to work with his paramedics.
The Kenya Defense Forces went in there like superheroes.
No hospital turned a patient away.
Blood banks were full before they were empty again.
#KOT outrage on NY Times images made them pull those images off.
Heaven was filled with prayers and questions.

So how are things now?

While my privileged position, including but not limited to the fact that no one close to me was injured or killed in the attack may make my perspective easier to hold, I am consciously choosing to see the good in people.

I take heart that for the first time Somali religious leaders have issues a fatwa (religious decree) against al-Shabab.

I take heart that this attack is the exception not the rule.

I take heart that when I was giving blood, Martha Karua, Kenyan MP & former Minister of Justice, was right beside me doing the same.

I take heart that there are more bridges being built to understanding than chasms of difference.

And I take heart that we can all break free from molds that don’t fit, whether those molds are based in hate, ignorance or fear. 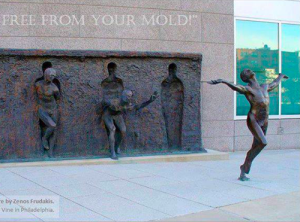